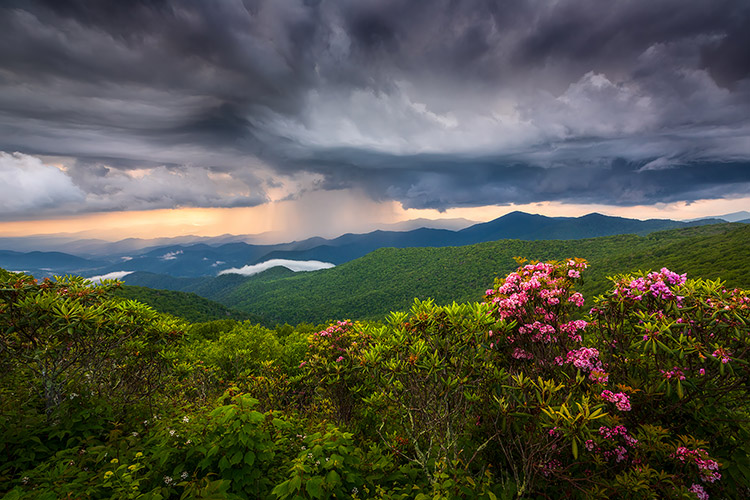 Beauty and the Beast

I have two distinctly different memories of my experience in the mountains near Asheville on the evening I shot this image. One of them is filled with beautiful mountain scenery, warm summer air, golden sunlight streaming down over the horizon signaling the impending sunset, framed in splashes of bright pink mountain laurel at the peak of their annual bloom. The other is filled with chaos, a bit of fear, and the sheer violence that a severe storm at altitude can unleash in a matter of minutes.

Mountain weather is unpredictable, sometimes swinging from one extreme to another in very short order. It’s a scenario that landscape photographers who shoot dramatic weather conditions in the mountains are familiar with. On the afternoon that I took this photo, it was a fun drive up the Parkway with the top off under partly cloudy skies, warm air, and abundant sunshine. I arrived to a typical summer evening scene, with a beautiful broken sky giving me high hopes for a nice sunset. While walking around putting my eyes on things, I noted that the sky was building quite rapidly, but ended up focused on the sweet golden light that had started spilling into the back of the scene behind those clouds. While setting up my gear to shoot, I became aware of a growing rumbling in the distance, which was confirmed by the vibrations in the ground beneath my feet. From that moment on, things started changing very rapidly. The sky filled in with ominous clouds, being swept up into surreal shapes and patterns by the high winds of a very strong updraft, and lightning began crashing down on the mountains around me, echoing off of the surrounding hills.

And yet this beautiful golden light was still there shining through it all, photographic nirvana, it’s the stuff we landscape photographers live for. You know you should probably be seeking shelter, but you get wrapped up in the moment, that dramatic image in your viewfinder is all that matters. Now we're having fun! It was exciting and beautiful as the storm approached and I was in no hurry to leave and miss the show. That’s when I shot this image. I continued shooting hoping to catch a frame with a lightning bolt, as they were coming down with regularity, but luck wasn’t with me there (and there’s no fancy lightning bug electronic trigger thingamabob in my bag, lol). This is the good stuff, it’s why we do it, the thrill of experiencing those unique conditions that aren’t easily found, and I am grateful to be here witnessing and capturing it.

And then reality strikes with a thunderous boom on the hillside behind you, and you realize that not a single car has passed by in the last 20 minutes on a road that was buzzing with traffic just a short while ago. The small storm you were shooting on the horizon just minutes ago has become a frightening beast looming ever closer. The light is gone now, high winds have replaced the calm, and it’s apparent that it’s coming straight at you.

At this point there’s no avoiding it, you quickly pack up and try to drive in the best direction possible, even if it is away from home. One minute down the road it starts raining so hard that you can no longer tell if there even is a road, and the last thing you saw was trees blowing sideways in the high winds, so you creep along in an effort to find the nearest safe pullout. And then the real fun starts. I couldn’t see anything aside from the occasional UFO flying past my windshield, and the sound was deafening. Lightning was repeatedly striking the mountain tops a few hundred yards away from me in multiple directions, that much I did know. Was that hail pounding on the roof? I honestly couldn’t tell. Even the ground was shaking, which isn’t a good feeling in an area prone to landslides. It only lasted maybe 15 minutes, a long 15 minutes it seemed, and then it ended just as quickly as it arrived. However, the landscape it left behind was vastly different, the trees battered and drooping, and the road littered with branches and debris. So much chaos in such a short time, and what an awesome display of power.

This might sound a bit strange to some, but I feel like I’ve gotten extra for my money. Two amazing and awe inspiring experiences, though quite different from one another, in the span of an hour. I’m reminded that Mother Nature can be both extremely beautiful, and frighteningly powerful, the beauty and the beast. 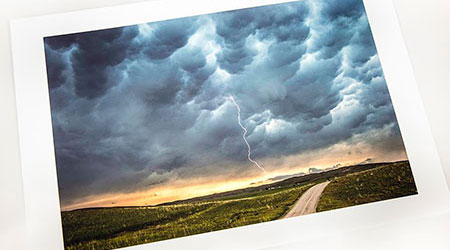 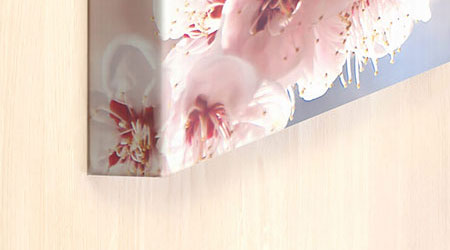